SCCM - USMT on Windows 10 'too many files for sharing'

You might see this occasionally in your environment when trying to run a USMT capture on Windows 10: 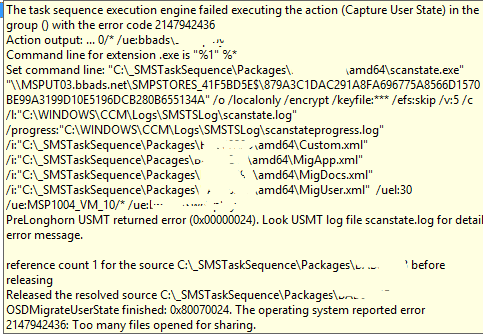 This is actually a bit of a redherring error, and we should open scanstate.log as recommended in the SMSTS log file.  At this point, the error should jump out at you:

Only Windows XP, Windows Vista, Windows 7 and Windows 8 are supported as sources.

Upgrade and use the 1511 release of the ADK.  As it turns out, Windows 10 was not a supported operating system with the USMT files in the RTM bundle of the ADK.

You should simply upgrade to the newest release of the ADK, version 1511, then update the source files for your USMT Task Sequences.

Note: don’t install the 1511 version of the ADK without installing the hotfix which came out in December.  Also, make sure you update your boot.wims afterwards too.

Once you do that, you’ll see a much happier log file for ScanState.

« SCCM Reporting - Can't save a report

Planning for SCCM Current Branch »
See an Issue with this page? Report it on Github Automatically!