I was trying to make a new Linux VM using the Azure PowerShell commandlet New-AzureQuickVM, which basically makes a VM very quickly for you using one of the images available in the catalog.  However, I kept running into this message:

New-AzureQuickVM : CurrentStorageAccountName is not accessible. Ensure the current storage account is accessible and in the same location or affinity group as your cloud service.

Recently at a client, a need arose to provide a report listing whether a workstation had an SSD or a spinning disk.

Unfortunately, Windows does not concern itself with noting whether or not a disk is spinning or solid state, and thus the information is not in the registry or WMI for us to collect with SCCM.

However, most manufacturers stick to a naming convention, and with a little bit of elbow grease, you can expand this to work in your environment too.  In this format, you’ll get ‘Known SSD Drive’ if the drive model or naming is captured in the CASE filter of query, or the drive model if not.

SCCM OSD: The case of the nightmare desktop

Recently, a client has been mentioning some issues they’ve had when doing image testing on a new desktop model.  I came in to help sort out the issue, and it was quite an experience!  We received all sorts of errors, many were quite puzzling.  In the end, this desktop (the HP ProDesk 6oo G1 SFF / Small Form Factor) and the issues around it tested every element of my SCCM OSD Troubleshooting knowledge.

Now that the matter has been solved, I’ll detail out the symptom and cause of each error:

New record for slowest speed of all time

I was wrong earlier.

Yep, this is now the slowest ever transfer. I was uploading the contents of a Server2012\Install\Sources\SXS folder to another server in Switzerland. Such Speed!

Just to be clear, this was the fourth attempt to complete this transfer, at a scorching speed of 3 KBPS!!

This was something of a puzzle for a few earlier today.

For a client, we needed to manually add an update to WSUS, to sync with SCCM for deployment. As one would expect, I launched Update Services, then right-clicked my server to launch the import update UI.

However, upon launching the Update Catalog, no checkbox is available to ‘Import directly into Windows Server Update Services’. Instead, the only option is to download the update content to a local directory, which is much less useful. 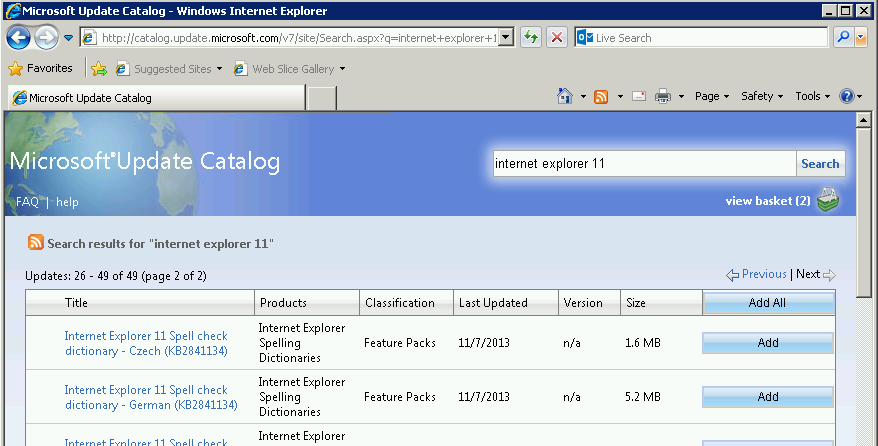 Missing Checkbox? There is no way to Import into WSUS as you see here.

Symptom: When launching the Microsoft Update Catalog from WSUS, no checkbox is available to allow for importing content into WSUS.

Cause: As seen below “ You must be logged on to the computer as an administrator to import the hotfixes.

Solution: Make sure you run the Windows Server Update Services console as an administrator.

This was pretty simple!  Make sure you run the WSUS Console as an Administrator.

Recently, a client had an issue with a particular patch to Office interfering with a line of business application.  The patch in particular was KB 2826026 - Office 2010 update: October 8, 2013.  Normally the procedure to uninstall a patch is to use Group Policy or SCCM to push out the following Windows Update Stand Alone tool command:

However this only works with Windows Operating System Updates (which are deployed in the MSU format).  When dealing with a software product update like this one for Office, the correct answer is to look in the registry for information about the update.

Browse to: HKEY_LOCAL_MACHINE\SOFTWARE\Microsoft\Windows\CurrentVersion\Uninstall\, and then search for the KB number of the update you need to remove.  Once found, look at the Uninstall String, and you’ll see a value like this:

This command will remove the offending patch, but requires manual intervention (clicking Yes) and then will force a restart.  You can use these values with an MSIexec command though to run the removal of the patch through Windows Installer, which will allow for logging and standard reboot controls, etc.

Use this example to help you create your MSI command:

This may force the shutdown of Office, and will not complete until the system has restarted, however.