Today at a client I had to export some Exchange Information from a one of their Exchange boxes. A simple task, but I kept experiencing some strange issues when I would run my script in PowerShell on the Exchange servers.

The only data I needed was RecipientType, LastLoggedOn and some other similar info, which is also easy to get. It needed to be extracted from Exchange and made ready for assimilation into a larger spreadsheet, so exporting as a Custom Object of some form would be the way to go.

I quickly came up which this script, which should have been more than up to the task. However, the output was very bizarre.

This shouldn’t export these sorts of things 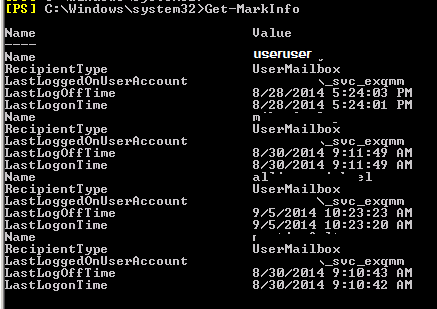 Oh no…why is my glorious [PSCustomObject] master race appearing as a hash table? No one asked for key:value pairs!

A hashtable? I never ordered a hashtable!  The CSV output was even worse

No properties? This is what happens when you export a hashtable and don’t enumerate

This was very puzzling. I tried everything under the sun to try and determine why my beautiful little PSCustomObject was coming out as an ugly hashtable. Surely there is an explanation somewhere!  I tried adding Format-Table commands everywhere you could think of, and sorts of craziness with using accelerators to try and force my PSCustomObject to be treated with the respect it deserves.

I ended up digging through old blogposts about ‘Whats New In PowerShell v2’ and v3, when finally I stumbled on these posts: http://stackoverflow.com/questions/14967920/powershell-3-pscustomobject-displays-in-stupid-mode-via-a-variable http://www.jonathanmedd.net/2011/09/powershell-v3-creating-objects-with-pscustomobject-its-fast.html

[PSCustomObject] casting is a new feature in PowerShell version 3.0!

There It was, right in front of me

I did some googling to try to refresh myself on the old way to do it, and even posted on PowerShell.org.

MikeFRobbins( http://mikefrobbins.com/, https://twitter.com/mikefrobbins) chimed in with a text-book perfect solution to my issue. So, I present to any of you who ever run into this same issue, the PowerShell 2.0 approach to creating and exporting a custom object.

Adding Autocomplete to your Textbox forms in PowerShell »
See an Issue with this page? Report it on Github Automatically!