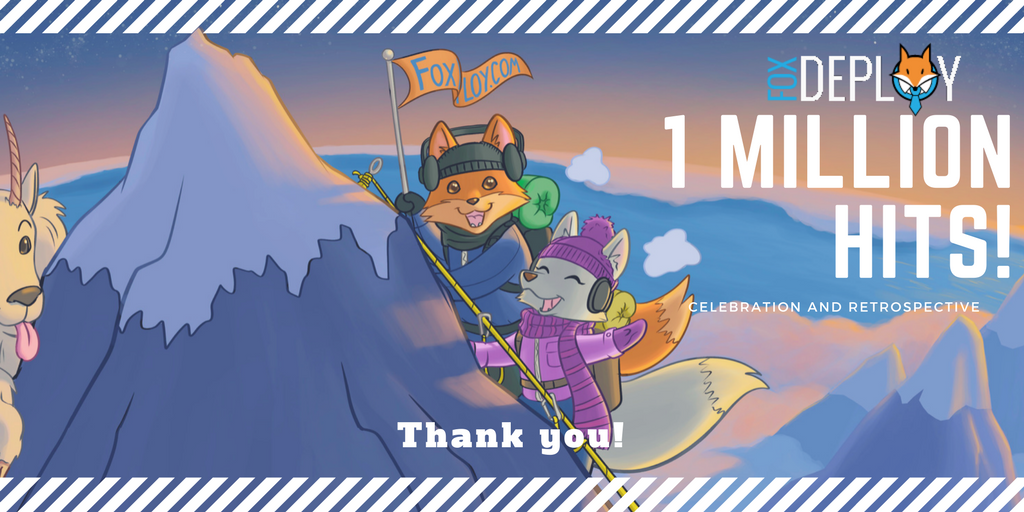 I hope you guys will tolerate a little bit of navel gazing for this post!

Today at the FoxDeploy Global Headquarters in Marietta, Georgia, we counted down to a very special milestone here!

First and foremost, thank you very much for sticking with me through the years and through the awesome engagement, comments and corrections!  In this post, we’ll take a quick look back at some of the history of the site, what I’ve learned, some hard knocks and some of the fun to look forward too!

Hard to believe that just under four years ago, on August 21st I made my first post here!  It was this helpful little post here, How to Reset your local admin password on Hyper-V.

This post has done well over the years, accruing a little more than 1,000 hits over the years.  I’m not why this might be, but this post on how to recover your password spikes every year after Cinco De Mayo.  What may have happened so that people accidentally locked themselves out?

The Monday after Cinco de Mayo had the greatest hits ever for this post. Looks like people all forgot their passwords for some reason…maybe Margaritas?

This post slowly gained some traffic and gave me confidence to focus on my writing in the evenings, but children would prove to make that a little bit difficult.

I tried writing on vacations, while my daughter played with sand.

](right after this was taken?) Care to guess how likely it was that sand got poured in my laptop

And writing while singing songs to my newborn son. 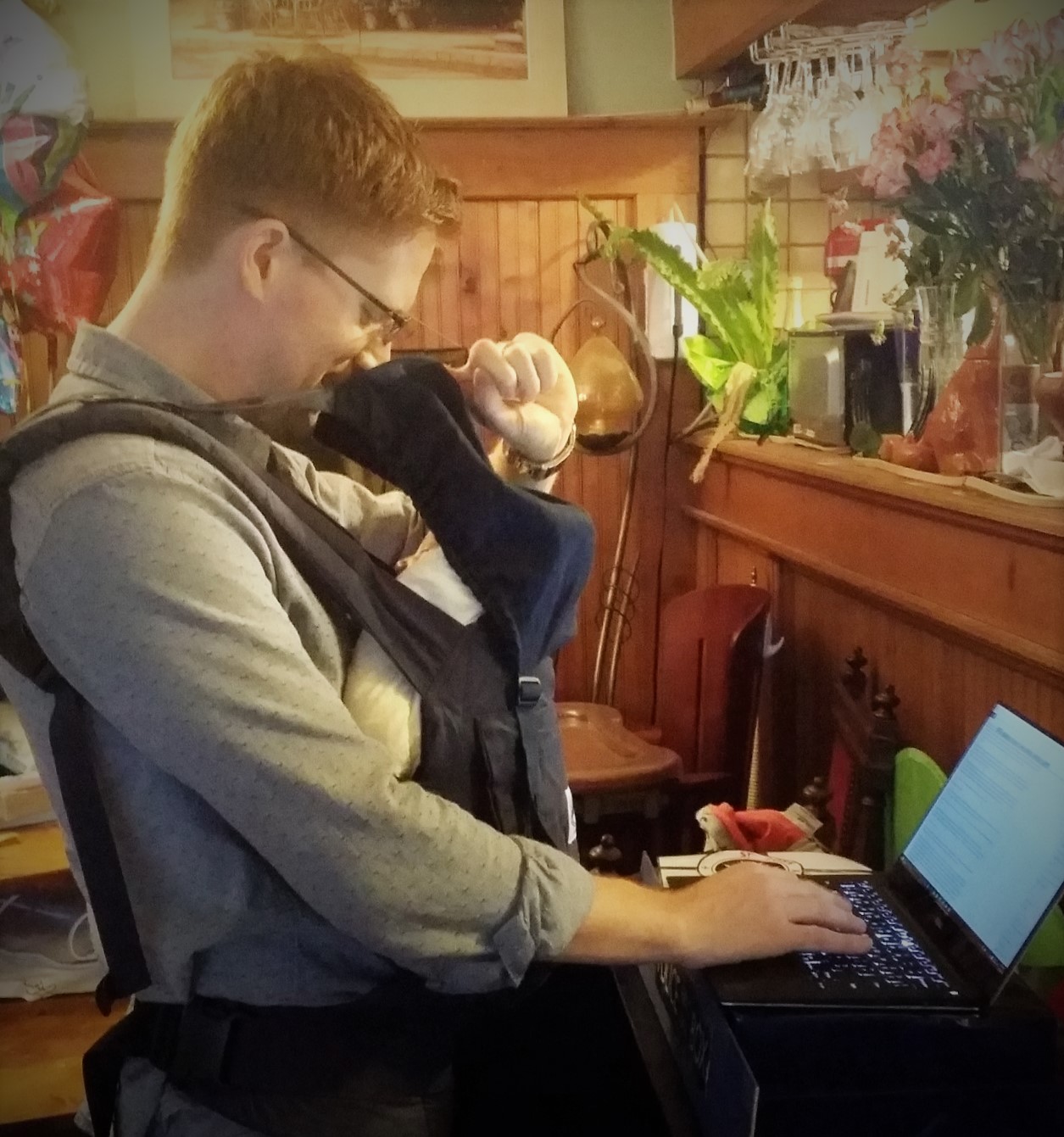 Blogging while bouncing my three week old son to sleep.

Fortunately for me, the Internet loved me, and I knew I could count on their support.  Or so I thought…

That one time when I was wrong

Oh boy.  I researched and researched this post comparing the performance of Storage Space vs Raid…and then totally got it wrong.

I knew I made an especially egregious error when I got an e-mail from people at Microsoft asking to meet with me, in person, when I was in Redmond the following week for the MVP Summit, hoping to explain the fundamentals of just how incorrect I’d been.  The comments from Reddit were…not super supportive.

That time Reddit banded together to make fun of me

I believe my most upvoted FoxDeploy post on Reddit was when I wrote a guide to Recovering Deduped files from Windows 10.

In the scenario the post covered, we had imported binaries from a Server version of Windows into Windows 8.1 desktop and installed them using DISM.  This was really unsupported, but worked and gave you full dedupe in Windows desktop!

However, Windows 10 didn’t know about this and would allow an in-place upgrade of Windows 8 and would remove the binaries, leaving users unable to access their files!

It affected me and a number of my friends, and the only solution was poorly outlined in forums on the web, so I wrote this guide.  Reddit thought that it was a hilarious predicament though and definitely gave me some, uh, constructive feedback.

That being said, this post brought in my single highest day of traffic EVER and continues to get good traffic and comments every month.  Maybe this issue impacted more Redditors than they would like to admit?

By far, no contest, my Creating PowerShell GUIs in Minutes using Visual Studio – A New Hope post is my single most popular post ever written, representing more than 140K views since writing it back in April, 2015.

Since publishing, it has been viewed an average of 200 times a day.  Wow!

What I’ve learned about you all

The awesome thing about writing this site has been the two-way communication I’ve had throughout.  Whether on Reddit, Twitter, StackOverflow or here on the comments at FoxDeploy, you have been SURE to let me know your opinions on everything I’ve written.

Here are some things I’ve learned about you over the years.

You LOVE contests and challenges

Probably my most fun posts ever, particularly where we look at the number of comments and audience interaction.

These contests were the most fun and had the most entries.

I will keep this in mind and make sure to create more of these in the future months!

You’re probably not from Svalbard, Guinea, Western Sahara or the Central African Republic

I’ve gotten traffic from all over the world, mostly from the US, UK and EU, which makes sense. But never even a single hit from these countries. 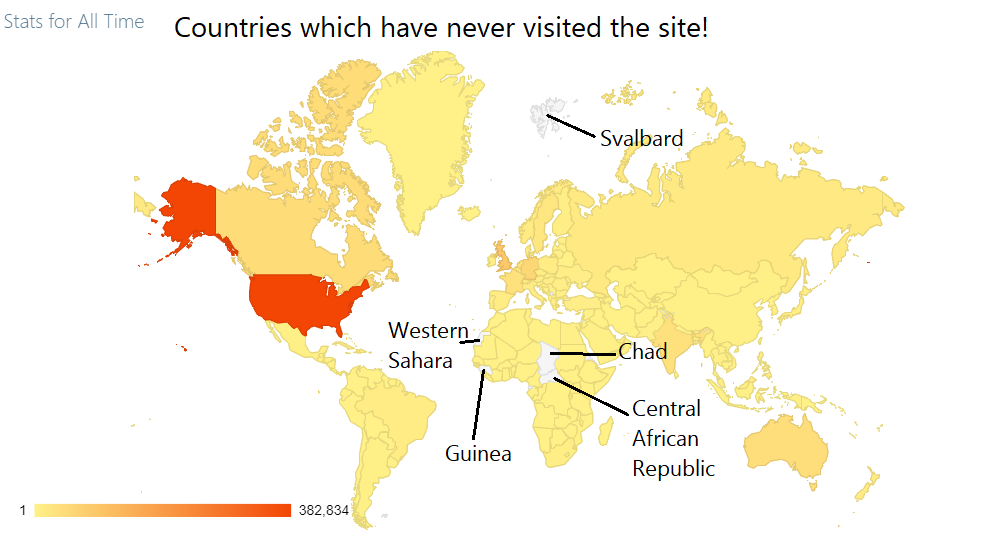 If you’re backpacking or traveling with a sat phone there sometime, make sure to load the site and then hit me up and let me know :)

I had to lookup Svalbard on a map to figure out what country that even was.

You love to check out the site at 8:00 on Wednesday

Not sure why this is, but it seems like Humpday is a good day for FoxDeploy. 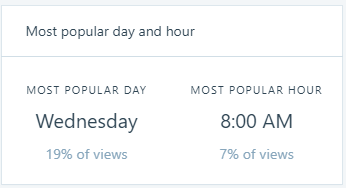 My theory is that you’ve managed to put out of all of your sysadmin fires, and finally regained some composure and…most likely, want to make some cool GUIs :)

What’s New and What’s next?

So, here’s what we have to look forward to in the coming months at FoxDeploy!

Commenting on WordPress is kind of hard to keep track of, particularly with the lack of threading and kind of iffy code-highlighting.  To solve this….

From now on with every post, I will include a link to the comment thread for that post.  This will make it much easier for me to be aware of comments and make sure I am able to help out that much quicker.

To celebrate this milestone, I have asked the awesome Joie Foster of the awesome HeyJoie Art.  We went back and forth on designs a number of times and she made so many excellent concepts, it was hard to choose one.  I absolutely love the way this image turned out and the way the image feels.  She’s really incredible.

If you’re looking for an incredible skilled and talented illustrator to help with your site, keep her in mind.

I had a GREAT time with some of the fun contests we’ve done on the site so far.  Expect more to come!  (And comment below or on our Subreddit if you have an idea!)

In coordination with my sponsor Altaro Software, I’ll be building a BEASTLY Hyper-V server and outlining the build and how to safely backup your VMs with Altaro.  This will be a performance monster and should be a lot of fun!  The hardware is starting to come in the mail, so I will be working on this one in the next few months.

Going even further into devops

I anticipate some exciting changes in the coming months and expect that I’ll have more and more material to write about the interesting worlds of PowerShell and Devops, in addition to more C# and GUI related posts.  Stay tuned!

Thank you so much for tuning in, offering feedback and helping me to grow as an author, and as a person. 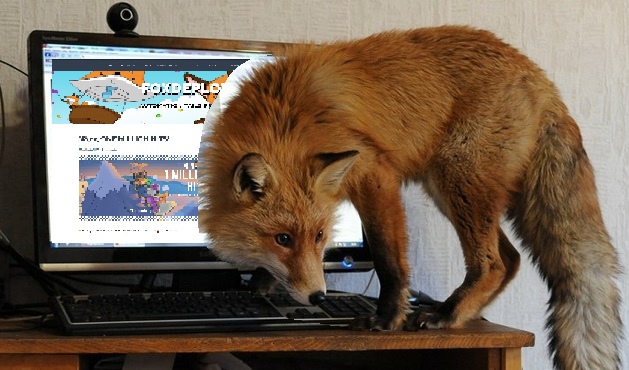 MDM errors failures and how to fix them »
See an Issue with this page? Report it on Github Automatically!